The Fleet appears to be split into two distinct packs of a lead group of 6 and a trailing pack of 5. Ha Long Bay Vietnam have been the first Yacht this edition of the Race to use Stealth Mode, emerging from their invisibility cloak in 3rd place. Right now the leading yachts are off the coast of Western Sahara roughly half way between the Canary Islands and Cape Verde Islands. The Scoring Gate lies ahead, with Sanya, Qingdao and Ha Long Bay looking best placed but there is still much to play for. Further ahead, but drawing ever closer, is the Doldrums and the Doldrums Corridor.

Now for the busy reader I can cover the Doldrums Corridor rules in just five words ………  You Can Use Your Motor.

But, like most things Clipper it’s not really quite that simple. As I touched on in a previous blog (see Blog 80: They’re Off Again, published 15 September), the Doldrums, or the Intertropical Convergence Zone (ITCZ) is the area where the northeast and southeast trade winds converge. It encircles the globe near the thermal equator, though its specific position varies with the seasons. Within the ITCZ  the average winds are slight. As trans-Atlantic sailing became more common-place in the 18th Century, sailors named this belt the doldrums because of the calm, inactive winds. To avoid, or rather reduce the time Clipper yachts may be becalmed within the ITCZ the Doldrums Corridor and the Rules were established.

The positioning of Doldrums Corridor and the North and South Gates are defined in the race instructions. Both lie north of the equator for this race and look like this: 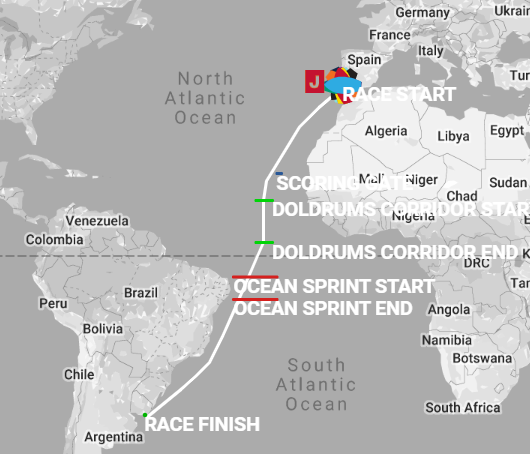 Each yacht is permitted to use its engine whilst in the Corridor subject to the following criteria:

For Diabetes and the National Autistic Society see:

One thought on “82. Ruth over breakfast this morning ……. “Explain these Dollydrums to me again.”……. The Doldrums Corridor Rules explained in 5 words.”