‘Here we go again’ from Cape Town has proved to interesting to say the least. As most of you will know UNICEF had to divert after a few days sailing towards Freemantle and head for Durban. Unfortunately one of the crew developed suspected appendicitis. He has now be landed in Durban and is receiving appropriate hospital treatment. Another crew member had a bad fall- losing a couple of teeth into the ocean- he has also left the boat in Durban.

The boat has refuelled, victualled and is heading in the right direction.  The following is Keiths post from the boat on Race 4- Day5.(Some of its contents have been over taken by time and events but the thought  on support and family remain the same)

‘Here we go ….back to South Africa’

We really are one big UNICEF team family. Race crew afloat, those crew members who have already finished their Clipper Race adventure and those waiting expectantly for their adventure to begin. Our extended UNICEF team family includes ALL our families, friends and supporters, some who provide fantastic personal support including victualling and even helping out with sail repair during stopovers, and those whose support is geographically distant but just as strong and just as welcome. Today, some family plans are on hold as the UNICEF family team afloat does what it is really good at and looks after one of its own in need of help and support.

We are sailing back towards South Africa- in the general direction of Durban. a prudent measure to seek timely medical support for crew member Andrew Toms,  the details of his condition having been released by a  Clipper Race press release earlier today’. Andrew is comfortable and resting. Our onboard medical team of Skipper Ian, Holly, Anthonie and John are giving Andrew excellent care, ably supported by long range advice from PRAXES. We are in good shape and hope to rejoin the race to Australia just as soon as we can. But Andrew needs us to sail as safely, accurately and as fast as we always do, only this time not quite in the direction we had intended. But the family comes first. The Race will still be there when we turn around. We will be back’

Keith expresses so well how valuable all the support for the boat and everyone concerned with the boat is.

Now the boat is heading to Australia in the Southern Ocean. The  skipper’s blog  reports ‘ the forecast has  50knots in it , so we know the gusts will be significantly stronger and the sea state will build up quickly … Bring on the cold, the wet, the grey, the wet and the ice squalls. Ohh did I mention the wet!’

So getting to Australia will be a challenge with an expected twelve day heavy weather epic.

Of all the iconic places in the world it’s hard to think of a more recognisable one to sail in and out of than Cape Table. Table mountain is magnificent. 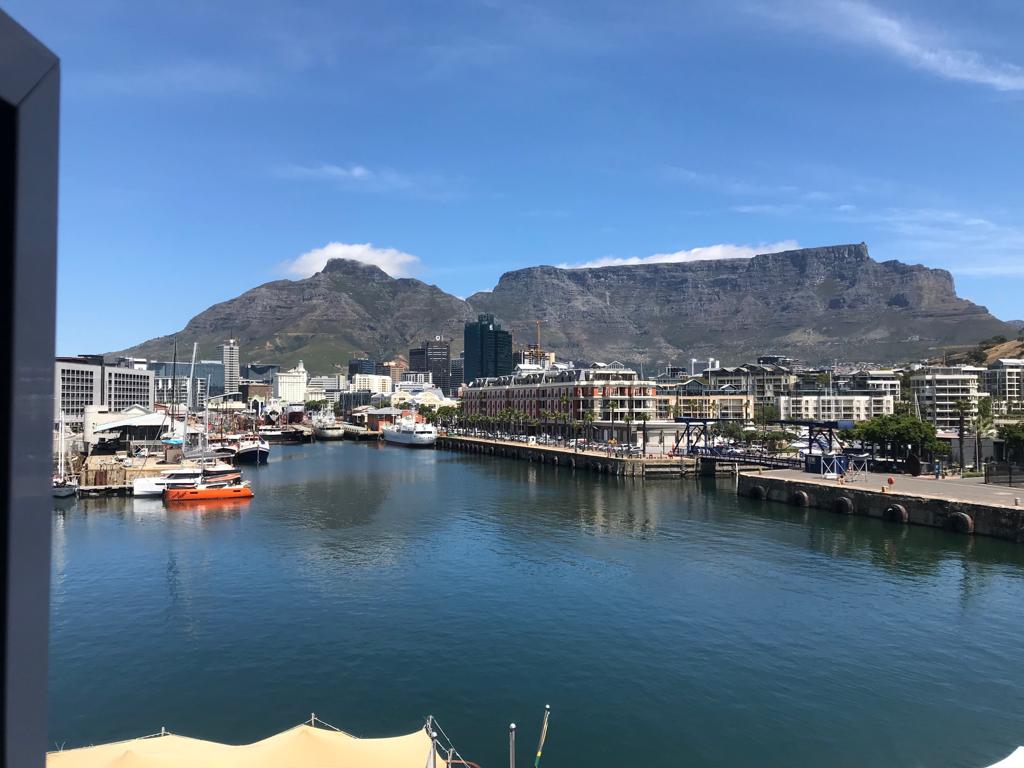 The clipper boats have been the focus of so much activity for the last few days. The crews are busy making sails right, vitaling, cleaning, maintenance and so many jobs big and small all of equal importance to get the boats ready to set sail again. 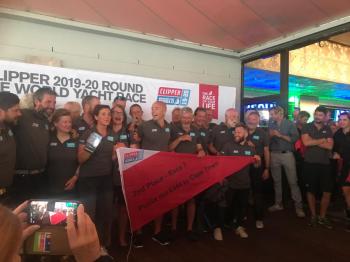 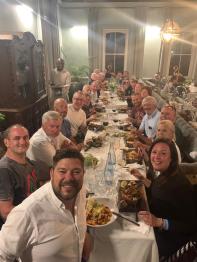 Then – so quickly as UNICEF arrived in one evening they slipped their lines and glided away in bright sunshine. 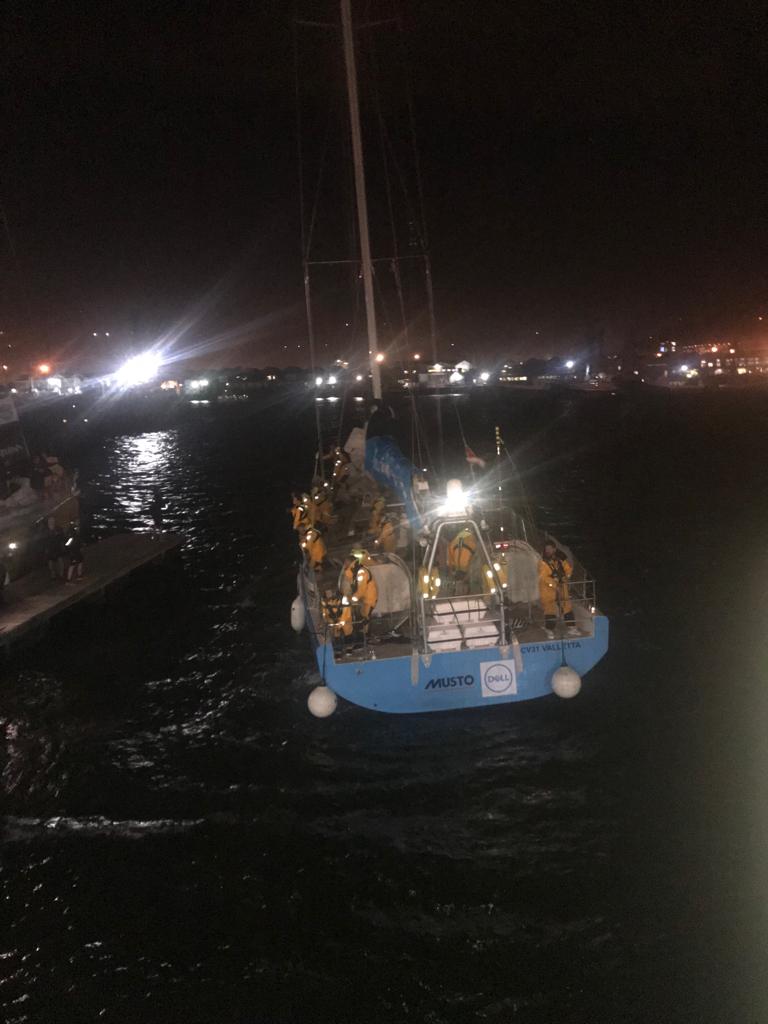 The parade of sail is a fine sight then the boats practise their ‘man over board’ drill and get themselves set for the start. Watching on the break water with others we watch them go far into the distance. Wondering just which way Australia is- there is such a mixture of emotions. 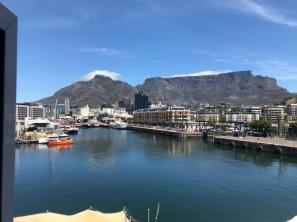 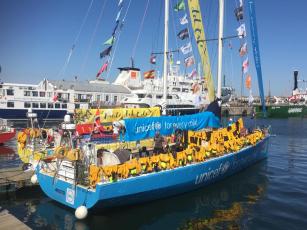 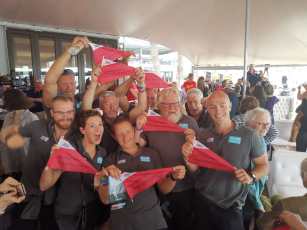 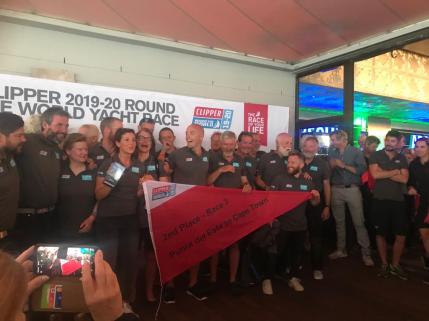 In the words of the UNICEF team song, “Here We Go” .. again, as today we finally say goodbye to Cape Town and South Africa. Next stop, fingers crossed, Fremantle Australia. The Leg 2 team have been joined by Tim, Rob, Thomas, Seb, Anne, Andrew Toms and Sophie – or I should say REjoined in Sophie’s case as she only left the team in Punta at the end of Leg 1 – and we have said our planned goodbyes to Gareth, Christian, Sheila, Joe (until he returns for Legs 7 & 8) and Jeremy (until Leg 8). We are back to a (near full) complement of 22.

So, once again on the eve of a race, how am I feeling? Well perhaps not quite as nervous as last time and certainly ready to go. The Southern Ocean is one of the reasons I first signed up for Clipper. I have never sailed in the Southern Ocean, and I will be rounding the Cape of Good Hope for the first time. The Southern Ocean has a fearsome reputation. Clipper have imposed an ice limit for example and yachts are not permitted to sail south of 45S for example. I expect it to be cold, wet, rough and tough. Extremely mentally and physically challenging.

So, what will it be like this time? Again, here’s what the official race magazine has to say:

“Cape Town to Freemantle is also referred to as the Southern Ocean Sleigh Ride. This leg offers some of the most extreme and testing conditions of the entire circumnavigation, with teams dipping into the notoriously strong winds of the Roaring Forties. Once clear of Table Bay, which is stunning but well known for its tricky, fickle wind patterns, teams will head for the first Great Cape, The Cape of Good Hope. It’s then on to the Angulhas Bank, where the meeting of the Indian and Atlantic Oceans causes very disturbed seas. Spinnakers are likely to reappear and ocean racing tactics will be in full flow. Teams will discover exactly what the Clipper 70s are made of as they surf downwind on swells higher than buildings.

Despite the gruelling reputation that the Roaring Forties command, this is a place respected by sailors as one of the best places to fully appreciate Mother Nature in her most powerful glory.”

And here is what it looked like in a previous edition

and in the 2017-2018 edition when the Greenings yacht was wrecked off the South African coast and subsequently washed ashore and, very tragically, Simon Spears was washed overboard and drowned from Great Britain…….

Time to go. Here We Go. Wish me luck.

and for UNICEF UK see:

Words don’t really do it justice. The South Atlantic was everything I expected and remembered. It was tough. Some of my colleagues describe it as the toughest thing they have ever done. I would caution them to add … “so far!” Getting a podium finish for us was undoubtedly the icing on the cake. That it turned out to be a 2nd place was really special.

And this is the official Clipper “take” on our Leg 2 across the South Atlantic. Put together with footage from across the Fleet, keep an eye out for team UNICEF – our sail number is 731X. I promise I was waving!!!

Please take a look. Thank You.

Those of you following this blog will know that I have quoted our skipper, Ian Wiggin, once before (see blog 88: We’re a funny lot us sailors ….., published 13 October). Those of you following the “action” on the official website will know that one member of each crew blogs to the official website on a daily basis AND that each skipper blogs every day. For those who might have missed it, here is the UNICEF skipper’s blog from 29th October (Leg 2, Race 3, Day 6 – somewhere in the South Atlantic:

‘It is another crisp and clear morning down here for us. Excitement is building for some stronger winds which are due later today. The smooth seas and gentle breeze of the past few days have been most pleasant but we are all now ready for what will hopefully be a wet and wild ride all the way to the finish (KW Editorial note: IT WAS!)

Yesterday during our rig check, we found that the cover on our old main halyard had snapped. We were able to lash the sail to the top of the mast and conduct our repairs without any drama or loss of speed. Big respect to the guys and girls who race single handed and have to conduct all repairs on their masts solo.

Personally I think there is something quite reassuring about having a team to help and look out for you. To show our team how cool and down with the times I am, I even took a virtual 360 – slow motion video of my face on the way down. I say virtual because I didn’t have a video camera. But, imagination doesn’t require any batteries and my “epic selfie face” still got me some respect from the millennials. From the top of the mast I was able to see a few small white dots on the horizon. UNICEF getting points at the scoring gate is looking unlikely at this point but we will keep pushing as hard as we can.

You may notice that I often tend to avoid discussing food. So please indulge me briefly. It was pointed out (KW Editorial note: NOT by me it wasn’t!) that my dinner was made by one of the (former) most senior ranking officers in the Royal Navy. Now who can say that 1. they have a Commodore on their team and 2. that they personally made them their gluten free pasta. “Come dine with me” eat your heart out!!

The food this trip is bittersweet …… not because the chefs are confusing the sugar with the salt but because our amazing victualled, and valued RTW crew member Angie was not able to join us on this leg. Having sailed 5500nm on Leg 1 sadly she took a slip in the shower ashore in Punta del Este on the first evening and injured her wrist. In spite of this, Angie helped us organise our provisions which is above and beyond anything that we could have asked. We are thinking of you, can’t wait for you to rejoin.

For Diabetes and the National Autistic Society see:

Please take a look. Thank You

When I arrived at the dock at the exact time the Unicef boat was backing in after its amazing  journey,  it was a great feeling.  Relief, excitement and joy to see everyone safe and sound. The official clipper folks greet them – give them beer and instructions on the legalities of immigration etc,etc. And we all wait and wait for what seems ages but is not really till the crew come up from the pontoon.

Then it’s a great wave of SMELL.

Everyone is thrilled, delighted, proud and it’s hugs alround. A fabulous moment with the smell temporarily and rightly forgotten.

Fast forward a couple of showers and time to find a good barber. Keith’s clothes and personal hygiene are now restored to  normal. Time to address The Beard.

After two and a half weeks at sea it needed attention! Lots of attention. The lady Barber went to work

Waxed, trimmed the works. Keiths first experience of waxing – I wonder if it will be his last- you will have to ask him. The result was

In time for prize giving

Waxing must be worth a charity donation!

Please take a look. Thank You.