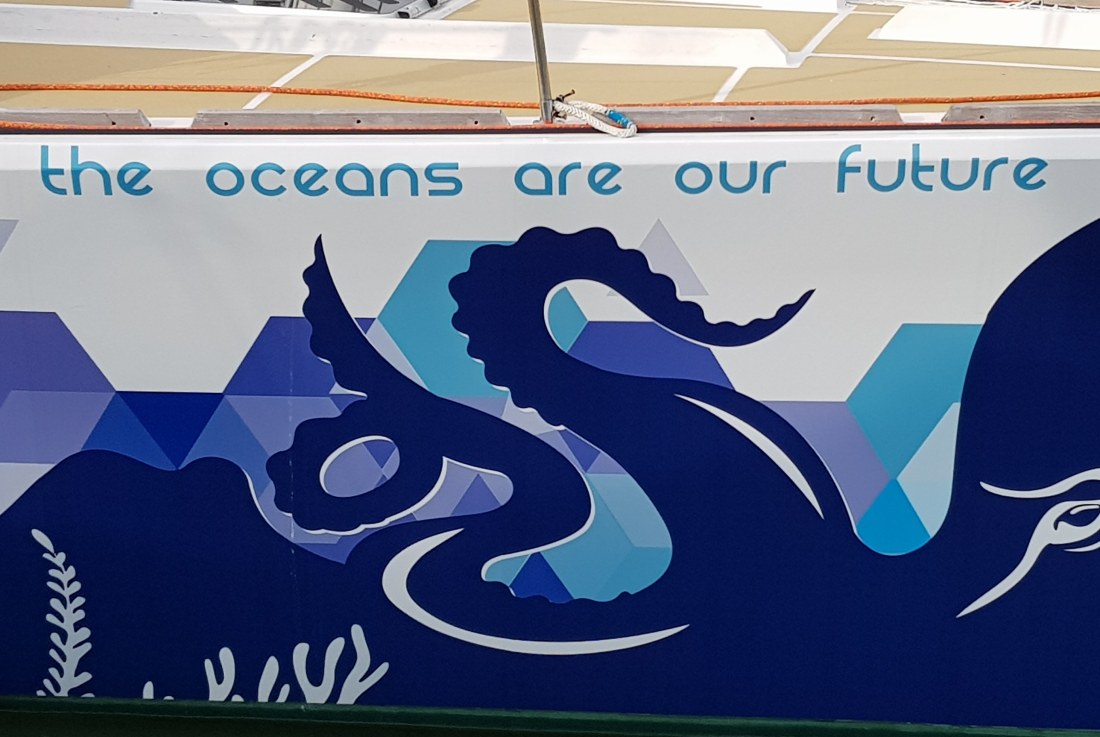 Right now I am somewhere between Madrid and Buenos Aires (in an aeroplane rather than a yacht) while the Clipper Fleet is (very roughly) in the general vicinity of Rio de Janeiro off the South East coast of Brazil and – again very roughly – 1000 nautical miles from Punta del Este, or at least the centre of the pack is. The lead yachts, Visit Sanya and Qingdao who are pretty much neck and neck, are less than 800 nautical miles from the finish line. The current tail end Charlie (Imagine Your Korea) is still over 1200 nautical miles away and Unicef and Zhuhai are locked in a tight battle for 5th and 6th place about now. This post comes to you courtesy of the pre-programmed “publish” facility so its time to wind-the-clock-back a couple of months ……… Portsmouth Prep Week!

At the beginning of August a whole bunch of us “volunteered” and gathered in Portsmouth immediately before the Fleet sailed around to London for a busy week of final preps onboard the team UNICEF yacht. It was a similar story on each yacht in the Fleet. By now many of the circumnavigators were living in Portsmouth, if not actually onboard the yachts, and long-distance travellers signed up for Leg 1 (from Australia, South Africa, China and the US for example) were in similar positions. So most (but not quite all) of our circumnavigators were there. It was a kind of team-building-week-Mark2 and it was also extremely busy.

No list can be completely exhaustive but to give you an example ………… all the old sails came off the boat and at various times all the brand new sails arrived. In the case of the latter these had then to be unpacked, marked-up accordingly, and then re-packed. And re-stowed. Some of this we could do onboard, some on the pontoon and some “elsewhere”. You need to read on for the “elsewhere” bit. In the case of the main sail (and at the risk of stating the blindingly obvious) it actually had to be rigged and fitted to the mast! Oh and on the subject of rigging …… all the main rigging is new and EVERY sheet – the lines that operate the sails – is also new and these had to be run through the appropriate deck fittings and cut to size. Ends had to be whipped with whipping twine and those areas most likely to chafe had to be additionally protected. All the jammers (through which these lines are run) were taken apart, deep cleaned, and reassembled – a somewhat tricky job undertaken by two people to prevent important items (such as a strong internal spring!!!) pinging over the side! A similar maintenance operation was conducted on all our winches.

All the safety netting on the upper deck was removed and new safety netting rigged, taking care to cut it correctly to allow for both the “gates” on the port and starboard sides just forward of the helm and the traveller. All the internal fresh, grey and black water systems (the tanks are new) were traced and sea outlets checked. The engine was serviced and various elements labelled to help at-sea maintenance particularly when cold, wet and tired. Our new batteries were checked. All the engineering spares we carry were sorted, labelled (re-ordered in some cases) and re-stowed. John Dawson – one of our circumnavigators and “lead” Doc)- received, checked, catalogued and packed all our medical supplies, both routine and emergency, various crew members built new platforms at the helm stations on which our helmsmen will brace themselves during periods at a 45 degree angle and ALL the safety equipment – most if not all of it new for this race – was carefully checked and stowed. Oh and the weather for all this in our beautiful August summer ………….. AWFUL. The first day of Prep Week coincided with the first day of the Cowes Sailing Week …… and the first day of Cowes was CANCELLED due to storms, high winds and rain.  A combination of all three summed up the week.

Various members of the team came and went during the week as visa interviews, other specialist training, family commitments and work/business were also addressed and the week finished with a BBQ event hosted by the sponsors of WTC Logistics, an event I sadly missed due to other commitments. I intend to make up for that in the future!

There were two other off-yacht events that I really must mention. Firstly, unpacking and packing a spinnaker (ok make that THREE spinnakers and a wind-seeker) takes space. Lots of space when dealing with a sail the size of a tennis court. Ideally you also need a fairly calm day. We were lucky with a gap in the weather – we had to pick our moment – and disappeared to a Portsmouth park for this particular evolution. It will be interesting to see if any grass stains mark our spinnakers when we arrive in Punta. That should make for interesting conversation, but perhaps not as interesting as some conversations and some stains…. so to avoid THOSE, our spinnaker unpacking was preceded by anti-dog-poo patrols of the park! NOT something I ever thought I would associate with a round the world yacht race!

The other major off-the-yacht activity was victualling. We have to eat and drink. So supplies for each crew for each day of Leg 1 had to be received, checked, unpacked (no unnecessary weight – this is a race remember) and then stowed as per the menu for each day in marked dry bags. All the ingredients for a complete days menu (pus bread and cake mixes etc) for 24 people likely to burn up to 5000 calories a day for 40+ days. All the labels were removed from EVERY CAN (if they get wet they will fall off/become unreadable anyway and create a great deal of mess) so every can was then inscribed with its contents. Tempting as it was to label tins of peaches as peas …….. the temptation was resisted! It was quite a back-breaking operation. Oh and then ……… all the bags, plus additional bags containing the necessary bulk foods, condiments, snacks etc) had to be transported back to the yacht ….. and stowed in such a way that they can be FOUND and RETRIEVED by Mother Watch at the start of their cooking duties AND the rest of us still have space to live and work, and maybe even sleep!

It was a great week. This is what it looked like in pictures and time-lapsed video, oh and before I forget, two editorial comments on the final video ….. 1. Check out the dance moves!!!! and 2. It was Grahams birthday but I cant remember what the drink was!!!!: 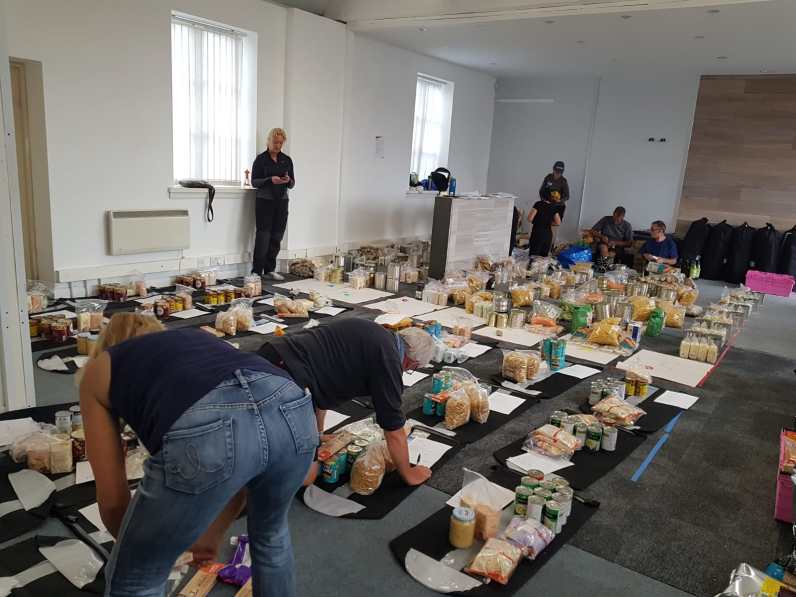 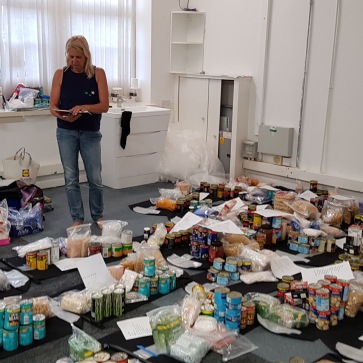 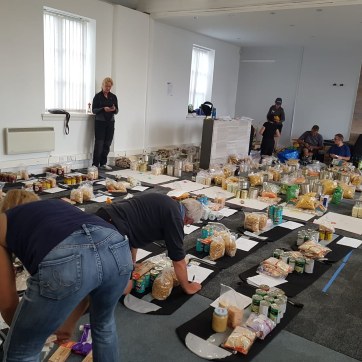 and for UNICEF UK see