Immediately after Sea Survival training it was a short drive down to Clipper HQ in Gosport to meet our Mate and Skipper and move onboard our Clipper 68 for the rest of Level 2. 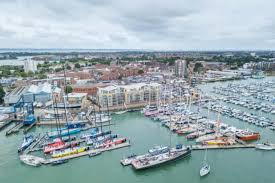 The 10 of us who had completed the first pool session were, unsurprisingly, the 10 who would now form crew 1 and once again I was training in CV2 (see Blog 15: Size Is Not Important, 13 Aug, for a brief resume of CV2’s Clipper history). After issue of our new Musto training foul weather smocks and sallopettes (red not gold), Anna (UK) our Mate, with bags of offshore yachting experience, led us immediately into the agility test as part of our Level 2 assessment. With all of the Clipper 70s in which we will race next year now in Gosport, bar two currently out of the water for refit (see short video Blog 18: First 2019-2020 stopover announced…., 26 Aug), and Qingdao already in 2019-2020 colours for a corporate event, Anna led us around the marina to one of the Clipper 70s for this first part of our Level 2 assessment. This kicked off with testing our ability to get onboard without the assistance of the step via use of one of the berthing ropes. The agility test, both above and below deck, also allowed us all another look around a Clipper 70, and for some of us this was a first. Rather like my look around Liverpool 2018 back in July, this all helped bring Clipper 2019-2020 that little bit closer and I couldn’t help but reflect that this time next year I will be in a Clipper 70 in the South Atlantic. 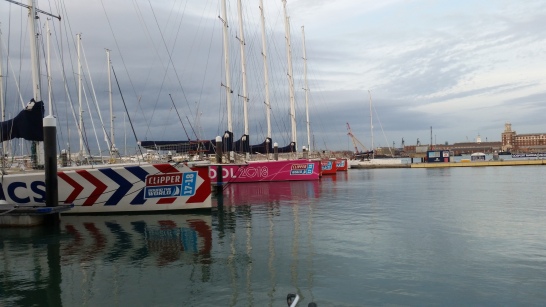 The team were a similar international mix to previous training.  5 men, David (from the East coast of the US), Mitch (from the West coast of the US), George, Rob, (who I had met previously at the Little Ship’s Club in London (see Blog 8: So How Did It All Start(2), 1 Jul) and myself all from the UK, and 5 women: Anna (from Portugal), Meta (from London but originally the US), Katrina (from London but originally Germany), Lucia (from Aberdeen but originally Czechoslovakia) and fellow blogger Jo from the UK – check out her blog at http://www.jojosclipperjourney.com. George and Jo had previously completed Level 1 together in July and Lucia was one half of the team that pulled me from the water (or at least waist deep from the water) right at the end of our own Level 1 back in April (Blog 9: Have you heard the one about ……., 9 Jul). Not surprisingly, having travelled from the West coast, Mitch was completing Level 1 and Level 2 back-to-back. We were split into two watches of 5 – George, Rob, Meta, Lucia and me in one watch, David, Mitch, Anna, Katrina and Jo in the other. As far as ages are concerned then let’s just leave it by saying that in a race to see who was eldest I would very comfortably achieve a podium finish and the last time I had a 25+ year age difference between me and the “skipper” I was an 18 year old Midshipman! There is, of course, no substitute for experience ………… I just need to get some in a yacht.

We were extremely fortunate (in my view) to have Chris Kobusch as our training skipper. In his early 30s and originally from Herford, North Rhine-Westphalia, Germany, Chris has been an RYA Yachtmaster (Offshore) since 2009, had previously been a Clipper training skipper in Sydney and has over 100,000 miles in his yachting log book. Perhaps more significantly Chris was the skipper of Qingdao during the

2017-2018 Round The World Race. During Leg 4 around Australia, Qingdao was hit by lightning during a 40knot Southerly Buster (violent squall) and still finished 5th on arrival in the Whitsundays. Chris and his crew achieved 4 podium finishes: 3rd into Sydney, 3rd on arrival into Sanya, 1st across the North Pacific into Seattle and 1st in the final race from Derry-Londonderry to Liverpool. Qingdao finished 3rd overall with 135 points, only 4 points behind Visit Seattle in 2nd (139 points) and only 8 points behind the winners Sanya Serenity Coast (143 points). In his profile interview for Clipper ahead of the previous race, in answer to the question, “what’s your favourite word?” Chris replied:

He went on to say, “Just kidding, my favourite word is Lekker, which is Afrikaans and can be used to describe anything good.”

Once back onboard CV2 Chris led us through an extremely comprehensive safety brief, with plenty of questions to us all to test what we remembered from Level 1, and took us through the plan for the week. More safety, and upper deck safety tomorrow morning, including MOB drills (tethered and untethered – see Blog 8: Have you heard the one about ………., 9 Jul) and sailing around lunchtime. The weather forecast for Saturday morning was heavy rain. The plan would then be to go through a mainsail hoist and then put 3 reefs in – one after the other before manually rigging the bow anchor (regular readers will remember my Level 1 observation that anchoring a Clipper Yacht is a very mandralic event), and then lowering the reefed mainsail and anchoring in a suitable lee provided by the Ise of Wight. We would be in anchor watches overnight Saturday/Sunday. Lucia and I would subsequently have the 0100-0300 Watch, for Naval and ex-Naval readers, my first Middle Watch (or Part Middle) for a good few years. We would weigh anchor on Sunday morning, shake out the 3 reefs as we hoist the mainsail, rig and hoist the headsails – Staysail and Yankee 3 in the first instance (more about mainsail, reefs and headsails various in the next Blog) and switch into a watchkeeping routine at 2000 on Sunday evening. The plan was 4 hours on, 4 hours off overnight between 2000 and 0800 and then 6 on, 6 off 0800-1400 and 1400-2000 BUT …………. and isn’t there always a but ……………. between 1200 and 1600 both watches would generally be required  ”on deck” for lunch and, more importantly, training evolutions that would require everyone to make the most of the opportunities, be that MOB exercises downwind or racing headsail changes etc. By the time Chris had finished there was time (just) for a swift drink in The Castle – “one for the road”, or perhaps “one for the channel.” And at least one of my “unknowns” from Blog 21: ‘Twas the night before ………, 12Oct, was answered …. we would be “turning left” out of Portsmouth and leaving the Solent via Sandown Bay and Nab Tower.