In Royal Navy destroyers, frigates and small ships, when the Flight (the aircrew) are not onboard the duties of forecasting the weather fall to the navigating Officer. So I’ve done quite a bit of weather forecasting. I would describe my abilities as “sunny with occasional showers and patchy fog.” You get the general idea. Actually I was once told that if you forecast today’s weather for tomorrow you will be right 50% of the time, which probably tells you more about my meteorological instructors than it does about weather forecasting. Thankfully forecasting, particularly modern professional forecasting, can be very good.

Hurricane Florence is now ashore and wreaking havoc, death and destruction in North and South Carolina.  Super Typhoon Mangkhut, having battered the Philippines, has now made landfall in China (not too far from Zhuhai – see blog 18, 26th Aug). In addition to the destruction of homes and buildings, landslides, record breaking rainfall and storm surges there have been, tragically, fatalities in America, the Philippines and in China. Unlike my skills as a weather forecaster, hurricanes are no laughing matter. With the remnants of former Hurricane Helene currently inbound for the UK, the weather is making front page news and leading the news bulletins, and for all the wrong reasons. 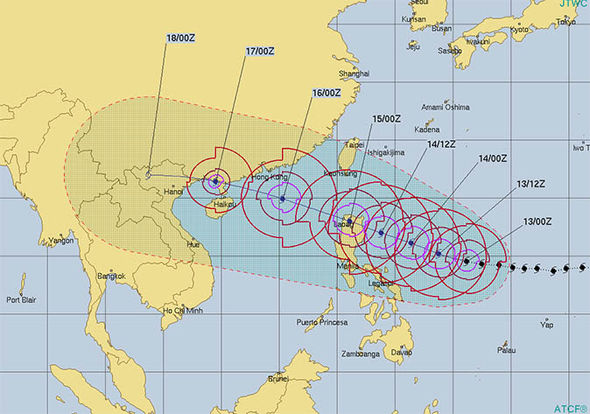 Being in the path of a hurricane, typhoon or cyclone is a daunting experience. Ask anyone from the crew of California, 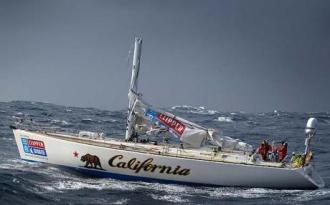 dismasted during the North Pacific leg of the Clipper 2009-2010 race or anyone from the North Pacific Leg 6 of the 2017-2018 edition who all experienced hurricane force winds and phenomenal sea states (waves in excess of 14m/46ft). Daunting indeed. And by the way, I should know, I’ve been at sea in THREE hurricanes.

In 1987 I was the Navigating Officer of the frigate HMS BOXER. After a protracted period operating in the Baltic, and following a visit to Copenhagen, we were inbound for Plymouth via the Dover Straits on the night of 15/16 October. That lunchtime, the Met Office forecaster Michael Fish began arguably the most infamous weather bulletin in British history with the words, “Earlier on today apparently a woman rang the BBC and said she had heard a hurricane was on the way.”

What followed was the Great Storm of 1987, hurricane force winds battering the UK in the greatest storm witnessed on the south coast of England for 300 years. Gales reaching 115mph caused devastation across the southern half of England, leaving 18 people dead, 15 million trees flattened, and a repair bill totalling £2bn.

What I remember most was being woken by the noise of the wind in the vicinity of Dover, being heeled over at a strange angle (the hurricane was pretty much on our port bow), and the very poor visibility caused by sea spray. The seas were not particularly rough, being knocked flat by the wind, but we have no record of the actual wind speed as it was stronger than the onboard instruments could measure. 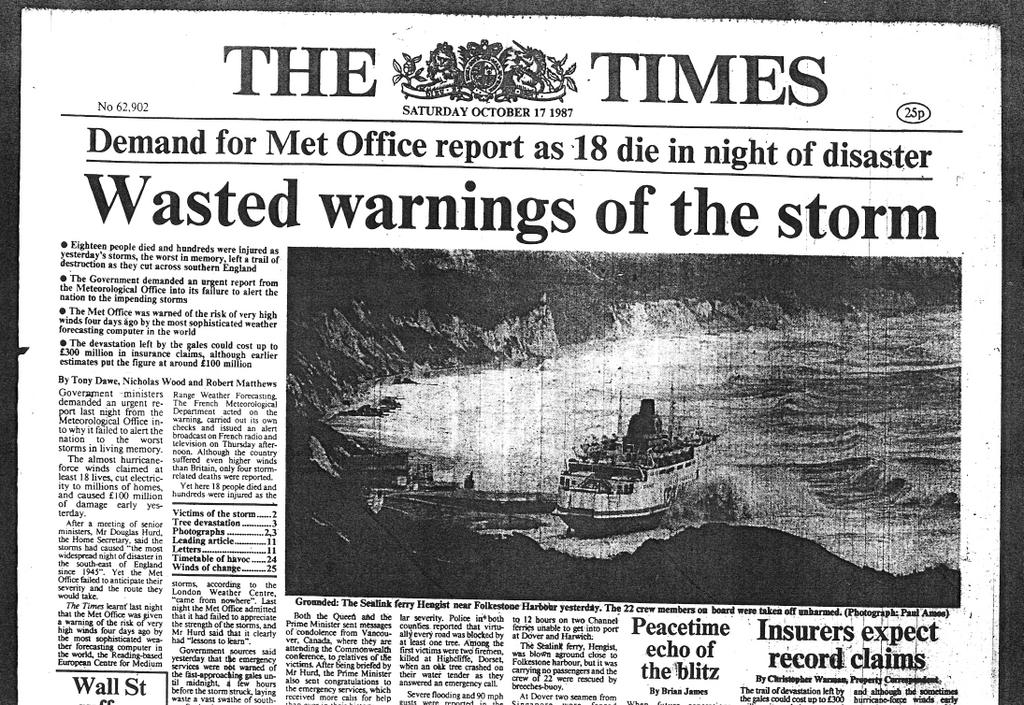 The Burns’ Day Storm (also known as Hurricane Daria) was an extremely violent windstorm that took place on 25-26 January 1990 over north-western Europe. It was one of the strongest European windstorms on record. Starting on the birthday of the Scottish poet Robert Burns, it caused widespread damage and hurricane force winds over a wide area. The strongest sustained winds were recorded at 75mph with gusts at 104mph. Casualties were much higher than those of the Great Storm of 1987, largely because the hurricane hit during daylight. It caused extensive damage, with approximately 3 million trees downed (far fewer than Oct 1987 because in January they were no longer in leaf), power was disrupted to over 500,000 homes and severe flooding was caused in England and West Germany. The hurricane also affected Ireland, the Netherlands, Belgium and Denmark. It is estimated that the storm cost UK insurers £3.37bn and caused between 80 and 100 deaths across Europe.

In the minesweeper HMS UPTON I had been operating in the outer reaches of the Bristol Channel as the hurricane approached. Warnings and forecasting this time were good but my problem was safety. On the exposed north Cornish coast there would be no shelter as the hurricane made landfall and no safe anchorage. The period from the Monday until Daria went through on Thursday was spent initially at anchor in St Ives Bay (the wind was already south-westerly at 50+knots), tracking Daria’s progress and planning a series of sprints around Land’s End (safely accomplished on the Wednesday) just ahead of the storm’s arrival. We anchored in Plymouth Sound to shelter on the afternoon of the 25th but dragged anchor at 0630 the following morning as wind speeds passed 60 knots. We re-anchored in nearby Cawsand Bay, as near to the hills as was possible, putting out both anchors and using main engines to assist as Daria passed through. The barograph trace (below) records a wind speed and direction of 240 degrees 90+knots at around 11am that day. You can see when we were not at anchor by the thickened blotches on the trace; not caused  by the ink smudging but by the exaggerated movement of the ship when underway. We eventually went alongside in the Naval dockyard in Plymouth on Friday, still in 30+ knots of wind.

There were 4 particularly destructive hurricanes that year: Luis (Cat 4), Marilyn (Cat 3), Opal (Cat 4)and Roxanne (Cat 3). 1995 is currently recorded as the 5th most active season in history. In the destroyer HMS SOUTHAMPTON I was operating in the Caribbean as the UK’s West Indies Guardship, a role that year that had already involved an extended period operating in support of the island of Montserrat following the eruption, and continued rumblings of a volcano in the island’s Soufriere Hills. Luis started as Tropical Depression 13 on 27th August but had strengthened sufficiently to be categorised as  Tropical Storm Luis by the 29th August and a Hurricane later that same day. By 1st September Luis was a Category 3 hurricane and by 3rd September, with sustained wind speeds of 150mph it reached Category 4.

By 3rd September HMS SOUTHAMPTON was manoeuvring at speed to make ground to be in the south west quadrant of Luis when we were diverted to rescue 13 Venezuelans from a coastguard station on the tiny island of Los Aves. That rescue complete, we manoeuvred around the rear of Hurricane Luis and followed him through the Windward and Leeward islands before anchoring off the island of Anguilla in the wee small hours of 6 September, the island having been devastated by the hurricane the

previous day. The eye of Luis passed over the north of Anguilla and the hurricane caused catastrophic damage to Barbuda, St Barthelemy, St Martin and Anguilla. Luis caused 19 deaths and left between 20,000 and 50,000 homeless, mostly in Antigua, Barbuda, Anguilla and St Martin and caused roughly $3bn (1995 USD) worth of damage. We were to remain at anchor off Anguilla until 15th September providing communications for the Governor back to the FCO in London, and landing sailors each day to repair the airport, open the port, fix generators and repair schools and Royal Marines to support the local police. As early as 13th September we were keeping a weather eye on Hurricane Marilyn!  Luis was to remain a major hurricane for over a week and was the most devastating hurricane to strike the northern Leeward islands in the 20th Century.

They say worse things happen at sea. Looking at the Carolinas, Philippines and China this morning, I’m not so sure.

2 thoughts on “22. Florence, Mangkhut and Helene ……. with memories of Michael Fish, Daria and Luis”